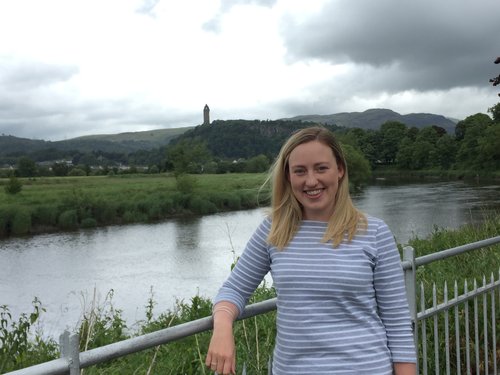 As I stood at the edge of this particular cliff looking at the murky water below I couldn’t help but wonder what an earth I was doing here? A bunch of friends had recently taken up the hobby of cliff jumping. I love an adrenaline rush, and having an ‘anything you can do I can do’ kind of attitude I decided to join them.

But now standing here, toes curling over the edge looking down, I couldn’t help but regret my decision. I knew my pride wouldn’t let me back down and so all I could do in that moment was stand and  ‘feel the fear’. The fear of falling before I was ready to jump, the fear of hitting a rock hidden beneath the wavy water, the fear of pain if I hit the surface wrong……. but most of all the fear of not going through with it.

It was fear that paralysed me to the spot.

My mind raced as I mentally tried to reason with myself – ‘I wasn’t going to die’ – ‘it might even be fun.’

I edged millimetre’s closer – the internal battle was occasionally drowned out by exterior shouts of ‘C’mon!’ as my mates willed me to go for it.

I made a decision . It was time. I was going for it.  I drew on every bit of courage I could muster as I wilfully instructed my body – ‘JUMP!’

Something propelled me forward and I began to fall through the air, my heart in my mouth. I could do nothing but allow gravity to pull me down. Finally my feet hit the water and I felt it swallow me. A surge of adrenaline was released and I fought to get back to the surface. As I emerged from the water a scream of victory erupted from within. I felt alive – that was awesome ! I looked towards my friends and smiled – let’s do that again!

God’s preparation process in every church planter is unique. He knows exactly what we need. Little did I know my cliff jumping adventures were growing in me the final ingredient I needed in my season of preparation. Courage to jump.

As I had considered an unexpected invitation to church plant I had by all accounts been ‘feeling the fear’. I was standing at the edge of the adventure of my life and my mind was racing. Fear of moving to a new city where I hardly knew anyone, fear of quitting a job that I loved, fear of failing, fear of not being good enough, fear of mishearing God ….but most of all fear of missing out on His great adventure.

I knew God had been stirring this in my heart, seeding my mind with jigsaw pieces of prophetic words over the years that were now beginning to make sense.

As I reflected on my fears I was reminded of a conference talk I had heard many years earlier by Alan Scott. He was talking about scarecrows.

‘Scarecrows only work because crows are dumb.’

He had my attention.

He spoke about how often this is a way the enemy works to scare Christians off the very thing that God is calling them to do. He puts scarecrows in the way of our fruitful fields. But if we get smarter in the things of the spirit we can begin to recognise fear as an advert for fruitfulness in our calling and walk with Jesus.

As I allowed myself to ‘feel the fear’ I began to recognise the scarecrow. That maybe just maybe there was a fruitful field on the other side of this giant leap of faith.

I made a decision. I was going for it. It was time to jump.

Nearly one year into this amazing journey I have become very familiar with the process of ‘feeling the fear’ and choosing to jump. God has been strengthening my faith muscle big time.

And He is so faithful.

3 weeks after moving we had our first Vision night. 8 people turned up. By three months we had grown to just under 20.

Next I felt a prompting to start Sunday breakfast meetings. Again it felt like a cliff edge. Were we ready for this? What if people didn’t turn up? It was a ‘feel the fear’ moment but I knew we had to go for it. So we jumped. Again, God was faithful.

Two things I felt God clearly speak at the beginning of this adventure was that as a church we were to ‘host my presence and look to serve the city.’

My biggest desire for our church is that we would host the presence of Jesus in a way that peoples lives would be changed as they encounter Him. That they would be set free from things holding them back in discovering their purposes and identities in God. In these first few months I’ve loved connecting with new Christians and see the faith of some old ones come alive.

I’m so encouraged by one family in our church whose daughter hadn’t been to church in years. She’s connected with us with her young son and has started coming regularly. She told me recently that we feel like her family and her mum is delighted that after the years of praying she’s finally back in church.

After several prophetic words in the beginning that our church would be a hospital we have prioritised prayer ministry and worship as we look to build a foundation of presence and freedom. I’ve loved seeing the early fruit of this already in people’s lives.

As we continue to pray about what it looks like for our church to serve the community we have started a monthly event called ‘Superhero Sundays’. The heart behind this is to begin to build relationships with children and families in our local community and to serve by speaking positive identity over them. Personally I’ve loved dressing up as a Superhero as well as meeting new families.

More recently our next cliff edge moment was to start Sunday services. I really wrestled with the timing of this but felt the Lord speak so clearly and decided to jump. Again He is faithful as we experienced another growth spurt connecting with new students in the city.

I know I am still near the beginning of this journey but I am already so grateful to God for what He has done and what He is doing.

I’m grateful for the amazing church family He’s gathered around here in Stirling, the sense of His presence with us and the opportunities to learn and grow as a new leader.

I know there will continue to be lots of cliff edge encounter’s as I wrestle with those ‘feel the fear’ moments. But I’m learning a new faith to take risks as the Holy Spirit leads.

I can’t count the number of times I was given the verse in Joshua 1:9 before I moved:-

‘Be strong and courageous . Do not be afraid, do not be discouraged, for the Lord will be with you wherever you go.’

People often tell me I’m brave for doing what I’ve done but I think this quote from John Wayne sums it up best!:-

‘Courage is being scared to death ….but saddling up anyway!’

So if it’s fear that’s stopping you, maybe just maybe it’s your time to –  JUMP!